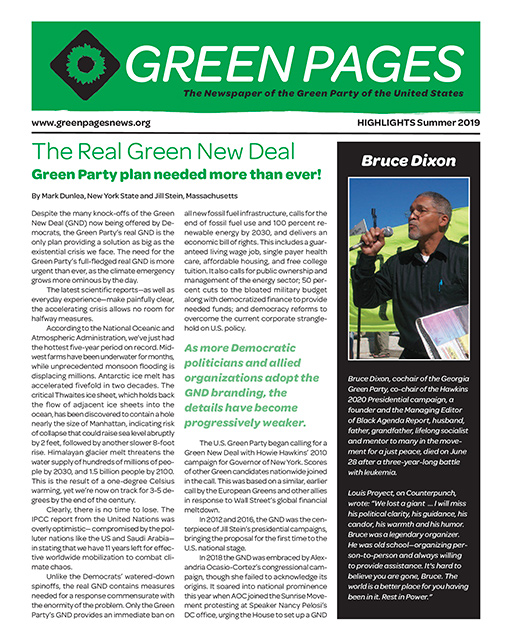 More Democratic Choices Coming To The Us

Green Pages HIGHLIGHTS is produced quarterly and is available for free download here, in color or black and white, for use by local and state parties in their tabling and outreach work.

The full PDF version of the current issue can be downloaded here (3.6 mb). 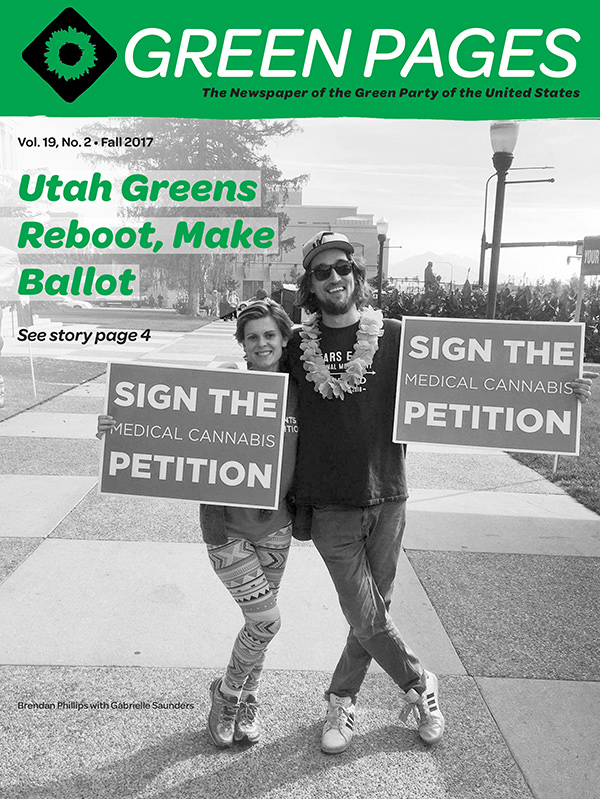 Caught In The Hurricane

How To Deal With All The Garbage

This Red State Is Turning Green

Politics And Music Stay In The Family

Greens Of The Americas Meet In Cancun

How To Get Universal Health Care

On The Necessity Of The Green Party Addressing Adultism Pinkney Released From Jail This June

A Strong Green Presence At The Annual Left Forum In NYC

Meet The Staff Of The National Office

Greens Organize To Win National Improved Medicare For All

Organizing For A Halt To Fossil Fuels The full PDF version of the current issue can be downloaded here (1.6 mb).

Volume 19, Number 1 Spring 2015
One more way corporations can take over

Success building for Greens across the country

Why has Top Two passed in two states and failed in two others?

Our campaign doesn’t end with the election

A time for us?

Getting the truly alternative viewpoint, The Green Shadow Cabinet Neo-Redemption Gerrymandering of the Electoral College How to get and keep a Green Party presidential nomination

Greens Convene in Baltimore in July

Greens have a presence at Left Forum The dangers of the Connecticut campaign finance law
State Greens sue to pull down law prohibitive to minor parties
by Mike DeRosa, co-chair of the Green Party of Connecticut

This yearís gathering to be cost-effective and fun
2009 Annual National Meeting to be held in Durham, NC
by Jan Martell, North Carolina Green Party

Landslide wins in Wisconsin
Green candidates win 7 of 12 seats in Spring 2009
by Ron Hardy, Green Party of Wisconsin and editor of GreenPartyWatch.org

Searching out the mole
Greens commence a lawsuit in pursuit of the Florida Five
by Barbara Rodgers-Hendricks, Green Party of Florida

A step-by-step guide to achieving ballot status
Arizona tells how they got it done
by Claudia Ellquist, Co-chair of the Arizona Green Party

First African Green University held in Morocco
by Mike Feinstein, International Committee of the Green Party of the United States

The Rabat Declaration
Approved by Consensus by the regional Green representatives from seven countries at the African Green University,
March 27th, 2009

Longest-serving Green leader in Canada to step down
by Mike Feinstein, International Committee of the Green Party of the United States

A belief in hope, but a commitment to vigilance
Looking harder than skin-deep at Obama
by Anita Rios, Co-convener of the Green Party of Ohio

Why Keynesian stimulus packages will not work
by Titus North, Pennsylvania Green Party

A plan for improving education
Bringing it home with tax cuts for test scores
by Lewis Pollis and Terrence Banks, Green Party of Ohio

Getting to know the Green Party platform
Economic sustainability, banking and insurance reform

The 21st Century Environmental Revolution:
A Comprehensive Strategy for Conservation, Global Warming and the Environment by Mark C. Henderson
a book review by David McCorquodale, Green Party of Delaware

Green
a poem by Chris Brandt

The color of Green
An Interview with Tony Affigne, Green Party of Rhode Island

In memory of a prominent man in political history
The life of California Green, Peter Camejo

Letter to the Editor
ìI feel like I speak from a very ìGreenî perspective for lack of another way to put it. This is why I feel on good grounds to offer a little criticism and concern on my part for the U.S. Green Party.î

A voice left out
Reflections on an Obama election

Exploding the Myth of the ëTwo-Party System’
Thinking Out Loud