This red state is turning Green

A profile on Texas

The nation’s second-largest state is also one of its reddest. In 2012 and 2014, Republican candidates for president, governor, and U.S. Senate all topped 57 percent of the vote in Texas, and the state has not had a non-Republican governor or senator in more than 20 years. But even in such seemingly inhospitable terrain, the Green Party is making inroads.

This past June, 2017, Alexsandra Annello won a seat on the El Paso city council in a run-off election. She garnered more than 60 percent of the vote against an incumbent. In 2012, two Green candidates for statewide office (state Supreme Court and railroad commissioner) received nearly 500,000 votes each, and the Green Party national ticket received more than 24,000 votes after receiving fewer than one thousand state­wide in 2008. Two years later, Green U.S. Sen­ate nominee Emily Marie Sanchez took 1.2 percent of the vote, and U.S. House candidate Antonio Diaz finished second in a three-way race with 15 percent of the vote. In 2016, Green George Altgelt was elected to the city council in Laredo, a city of 250,000.

Texas is a red state, so there is no ‘lesser evil’ risk in voting Green.

The Green Party of Texas (GPTX) already set a new record in 2016, with more than 50 candidates running for offices across the state. There are candidates for the U.S. House in 19 of the state’s 36 districts. This was the first time the Green Party fielded candidates in a majority of the state’s races. GPTX has held workshops to prepare for a petition drive for ballot access. Five people have already declared to run for specific offices in 2018 with others intending to run for an undecided office. 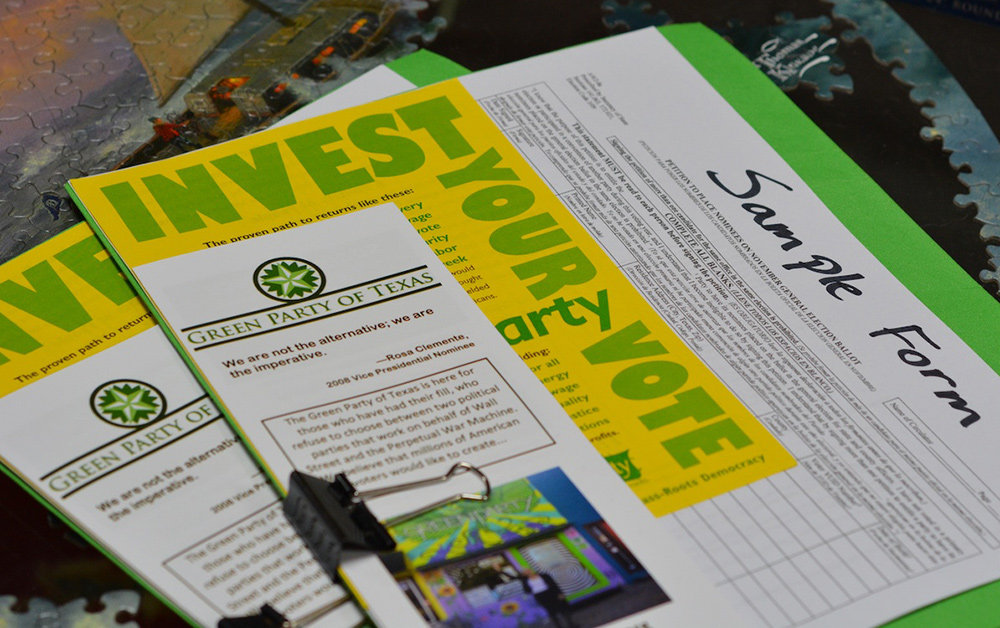 “Texas is a red state, so there is no ‘lesser evil’ risk in voting Green,” said Aaron Renaud of GPTX. “Besides, the Democrats do not have the energy or motivation to fix the campaign finance system, in that regard they are just as culpable. In the end, I would say to vote for the only party that doesn’t accept corporate donations. I would say to put real people into office, not politicians.”

But there are challenges in organizing in a state that covers more than a quarter-million square miles and that has more than 250 counties. Co-chair Laura Palmer says, “Because the state is so large, party cohesion is one of our biggest challenges. Getting to know party members in other areas, keeping track of the status of local parties, and having the ability to screen volunteers for key roles are all enormous concerns.” Palmer says the GPTX has started to implement an “intentionally regional approach,” urging locals in the same parts of the state to work together.

Beyond the physical and logistical challenges, some aspects of the Green agenda are a challenge to sell in the Lone Star State. “Obviously Texas is deeply invested in oil and gas, so the complete transition to renewable energy is received with some anxiety and skepticism,” says Palmer. “But even so, people seem willing to concede that it is a transition that must eventually happen. There is also resistance to the idea of a basic income, as if people can’t believe that we could actually provide for everyone. . . . Still, I think the assurance of basic income could be a comfort to those who have anxiety about systemic transition; so that people need not fear losing their job in the oil and gas sector, because everyone will be allowed a basic living.”

Renaud sees a similar challenge. “While people can easily identify with rooting out corruption, fair campaigns, environmental protections, and other common-sense ideas, the myth of the American Dream is still very powerful, especially in Texas,” he says. “There are many that do not acknowledge the relationship between economic and social oppression.”

“Our humane perspective on immigration is certainly welcoming to the Hispanic community,” Palmer says. “Poverty, social justice, and the need for single-payer healthcare all resonate here, as does ending the drug war.”

Poverty, social justice, and the need for single-payer healthcare all resonate here, as does ending the drug war.

Renaud says Greens in Texas are reaching out to the state’s Latinx community by working with the new GPUS Latinx Caucus and producing campaign literature in Spanish. He adds, “Many of our members, candidates, and officers are Latino/a or speak Spanish, much like Texas as a whole.” 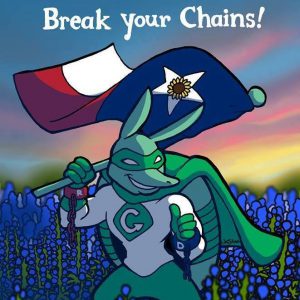 “For years, we have watched as the establishment agenda grinds on,” says Palmer. Regardless of which party is in power, we continue our imperialist wars and policies that benefit big business.” But Texas “is very liberty-loving. . . . To the degree that GPTX can project itself as non-statist and respectful of the rights of individuals while also recognizing the need for government to function for the common good, we emerge as a viable alternative.”

Palmer sees opportunities for the party as voters become disenchanted and turn­out declines.

“With all the billions of dollars that are poured into elections each cycle, the establishment parties can’t even motivate more than one-third of voters to participate,” she notes. “As soon as Greens build enough awareness in the general public, we are poised to emerge as a major factor in U.S. elections by giving the disenfranchised two-thirds something to vote for.”

How to deal with all the garbage
Mark Dunlea January 7, 2018