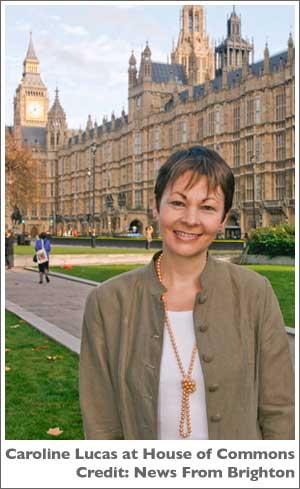 Most Greens elected on the federal or state level around the world have been elected in multi-seat districts through systems of proportional representation.  However, the recent election from single-seat districts of Elizabeth May to the Canadian House of Commons (May 2011) and Caroline Lucas to the British House of Commons (June 2010) raise questions as to whether this is the beginning of a new trend. The answer is a qualified maybe.

Since 1999, 15 Greens have been elected in single-seat federal races, exclusively on a Green Party ballot line. Six of them — May, Lucas, Hans-Christian Ströbele (Germany 2002, 2005, 2009) and Jeanette Fitzsim­mons (New Zealand 1999) have won winner-take-all, first-past-the-post elections, in competition with all of the other major parties. These are the most difficult races to win, because there is an inherent pressure to vote for the ‘lesser of evils’ rather than an emerging party like the Greens. Yet despite this disincentive, it is a strong indication of the Greens’ growing appeal that voters are beginning to elect them even under this system.

Additionally, two Australian Greens have been elected in single-seat federal races using the single-transferable-vote (instant run-off voting), where voters rank candidates in the order of their preference. This eliminates the ‘vote-splitting’ dynamic of first-past-the-post systems, and the structural suppression of voter preference that results. By contrast, in France’s two round majority run-off system, Greens have eliminated the ‘vote-splitting’ dynamic by cooperating with the Socialists in an electoral coalition, so that only one candidate between the two parties would contest each race. This has led to seven Greens being elected to the Assemblée Nationale. Yet another approach has been tried in México where in 2009 four Greens were elected in single member districts to the Mexican Federal House of Deputies through an alliance with the Institutional Revolutionary Party (PRI), where each candidate appeared on both the PRI and PVEM (Partido Verde Ecologista de México) ballot lines. In each case the majority of votes came on the PRI line.

On the state level, 18 Greens have been elected in single-seat races exclusively on a Green Party ballot line, in competition with candidates from all the other major parties. Seventeen have come in either the German state of Baden Württemberg in 2011 or the German city-state of Berlin since 1995. The eighteenth was John Eder, to the Maine State House of Represen­ta­tives in 2004. Two other U.S. Greens have won two-way state house races against a Democrat: Eder in 2002 and Audie Bock to the California State Assembly in 1999. And in Australia, two Greens – Jamie Parker and Adele Carles – have been elected to state legislative assemblies in single-transferable-vote elections. Greens are targeting green-friendly districts
After the previous Canadian federal election in 2008, the Green Party of Canada made a strategic choice to: identify the one district in the entire country most likely to elect a Green, have its party leader move there, and to have the party concentrate its resources into electing her. May moved across the country from Nova Scotia to British Columbia to give herself and the party the best chance to win.

In England, the Green Party specifically targeted three districts – Brighton Pavilion, Norwich South and Lewisham, of which they had strong existing support and significant local government representation, including one – Brighton Pavilion, where Lucas was elected, where the Greens are the largest party on the local city council.

Greens are winning the largest share of the multi-party center-left vote
In the case of May, the Green Party had never won more than 16.7 percent of the vote in her district and had no local government representation. But with her national presence and reputation, along with a lot of grassroots organizing May was able to unify 70 percent of the three party center-left-green vote there around her candidacy to defeat the five term Conservative incumbent. The riding’s electorate was ripe for someone to do just that owing to a frustration where in the last three elections, between 56 percent and 65 percent of the electorate had voted for one of the center-left candidates and yet the Conservative incumbent won each time with a small plurality of the vote.

In Germany, Hans-Christian Ströbele has been elected three consecutive times to the Bundestag (federal parliament) from the ultra-progressive Friedrichshain-Kreuz­berg district in Berlin, by finishing ahead of both the Social Democrats and the Left Party. The same thing has been true eight times since 1995 in parliamentary elections of the city-state of Berlin from the same area.

Greens are winning where they aren’t being held back by the perception of vote-splitting. In Australia, Greens running in single-transferable vote elections don’t face the pressure that Greens do in first-past-the-post systems, i.e. the perception that a vote for a Green will elect a conservative. Under this system, Adam Bandt became the first Green elected to the Federal House of Representa­tives in 2010 by 56 percent to 44 percent over the Labor Party candidate (after the preferences were transferred) in a Melbourne electoral division that was held by the Labor Party since 1904.

In France, Greens have eliminated the vote-splitting perception by literally splitting the candidacies between themselves and their primary competitor for left-of-center votes, the Socialists, so that only one candidate between the two parties would contest each race. The victories of May and Lucas should give hope to U.S. Greens because they occurred in single-seat, winner-take-all districts in elections with a relatively large number of votes cast (68,987 and 51,834 respectively), where left-of-center voters were willing place their faith in the Greens instead of the larger center-left parties. May’s election helps because it happened right here in North America, and just like the existence of Canadian single payer health­care, the very presence of a Green MP across the border makes the prospect for it in the U.S. more plausible.

At the same time, the U.S. does not have a history of multi-party democracy the way Canada and England do. The average turnout in U.S. Congressional elections is also between 150,000 and 250,000 voters —  approximately two to five times the number that turned out in the elections of May and Lucas — meaning their results may be more transferable in the U.S. to safe, left-of-center, mid-size state legislative districts, than for U.S. Congress.

The targeting strategy of English Greens was to focus in areas with a history of Green success in local government. The three most similar areas in the U.S. are Portland, Maine; Madison, Wisconsin and in Cali­for­nia along the coast through San Francisco, Marin, Sonoma, Mendocino and Humboldt Counties.

The results in these areas thus far have been to elect Eder twice in the Portland area and to run a strong first time 31 percent second place State Assembly finish for Ben Manski in Madison in 2010. But in Eder’s races the total number of votes cast were between two and three thousand, while in Manski’s it was only 25,000. In California by contrast state assembly districts contain an average of 450,000 residents. So the prospects for further state legislative victories are most likely in those states with smaller districts. It also should be remembered that in targeting strategy, both May and Lucas benefited from the press coverage they received as national Green party Leaders before they were elected (May since 2006 and Lucas since 2009). Many U.S. Greens, pensive about hierarchy, have been reluctant to designate individuals with such titles and positions. Will the experiences of Greens elsewhere cause U.S. Greens to rethink this position?

On the horizon, perhaps the best next chance for victory is Mark Miller in the Third Berkshire District of the Massa­chu­setts State House of Representatives. Mil­ler received 45 percent of the vote in a two-way race against a Democrat in 2010 and since then, that Democrat has been appointed to a district court position, leading to a November 2011 special election for the now open seat.