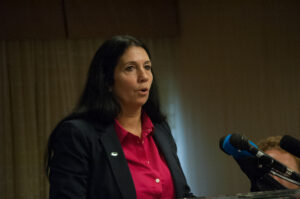 In 2011, Cheri Honkala ran for Phila­del­phia sheriff on the Green Party ticket. Her platform wasn’t about enforcing foreclosures, but rather as sheriff she planned to refuse to evict people from their homes. As Honkala has dedicated the past 25 years to protecting the poor and homeless, it became clear to her that running for sheriff seemed the thing to do to stop foreclosures, particularly as big banks were given bailouts while little was done to help the 6 million Americans who faced the loss of their homes. Hon­kala received more than 10,000 votes in Philadelphia that election, demonstrating how her mission rang true for many in the city.

Now she is the Green Party running mate to Jill Stein in the 2012 presidential campaign.

“It’s very exciting. I think I’m prepared to take on this challenge. I was absolutely shocked when I was chosen, but I think it’s a real statement about the Stein campaign. And it meant so much to people across the entire country. Once the an­nouncement was made, I literally received hundreds of letters, not just from people in this country but from folks around the entire world,” Honkala said in an interview with Amy Goodman on Democracy Now.

At the age of 17, she was a single mother living out of her car and spent years in and out of homelessness . . . by 1997 she was named Philadelphia Weekly’s “Woman of the Year”.

Honkala has spoken for the rights of Amer­icans living in poverty and has helped in numerous ways to secure them a better life, including creating a network for them to live in abandoned houses. She said that sometimes she has broken the rules be­cause—as in the case of slavery, when it was legal—”at times the laws are wrong.”

She was recently arrested with Jill Stein at a protest in front of the office of Fannie Mae, the government-sponsored mortgage company, in an effort to get executives to meet with two homeowners who were about to lose their homes. Honkala also confronted politicians at the Repub­lican National Convention in Florida in an encampment called Romneyville. She voiced the concerns of the 99 percent on issues of home ownership, education and health care.

At the age of 17, Honkala was a single mother living out of her car and spent years in and out of homelessness. After she moved into an abandoned HUD home to keep her family from freezing, she be­came a pioneer in the housing takeover movement. She has since co-founded the Kensington Welfare Rights Union and the Poor People’s Economic Human Rights Campaign. Honkala has organized tens of thousands of people, holding marches, demonstrations and setting up tent cities.

Honkala’s activism, dedication and astute solutions to rectify devastating poverty in the country have brought her even more recognition. She has since been the recipient of numerous awards, including the Bread and Roses Human Rights Award, Public Citizen of the Year by the Penn­syl­vania Association of Social Workers, and the prestigious Letelier-Moffitt award from the Washington Institute for Policy Studies. In April 2005, Mother Jones magazine named her Hellraiser of the Month. Front Line Defenders has named Honkala one of the 12 most endangered activists in America.

In 1996, Pulitzer Prize-winning reporter David Zucchino chronicled Honkala and the Poor People’s Economic Human Rights Campaign for six months in his book The Myth of the Welfare Queen. He de­tailed how she organized 70 homeless families, setting up two encampments. At that time, she was arrested and charged for attempting to set up a tent city in front of the Liberty Bell. Honkala faced more than 10 years in prison, but was absolved of any crime. In 2000, at the Republican National Convention, Honkala led a march of more than 100,000 people, and at the United Nations addressed representatives of 148 governments on poverty.

Honkala grew up in Minneapolis, Minn. She has two sons. Her son Mark Web­ber is an actor and director. Honkala has played herself in Explicit Ills, Webber’s drama about poverty in Philadelphia.