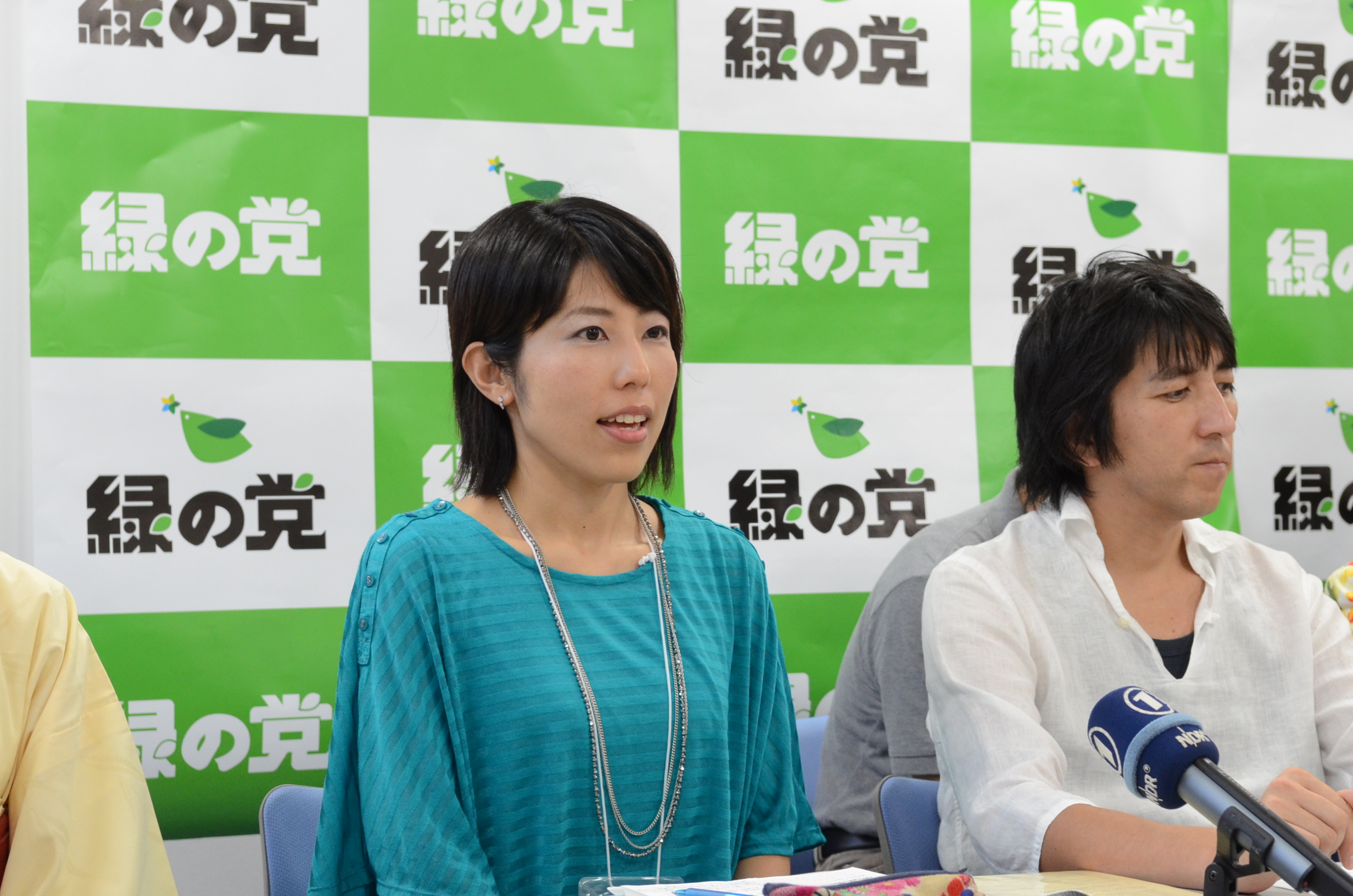 In the aftermath of the nuclear meltdown catastrophe at Fukushima, a new Green Party has arisen in Japan. Hop­ing to harness record public opposition to nuclear power, over 400 concerned Jap­anese citizens, and anti-nuclear and environmental groups gathered in Tokyo on July 28th to launch Midori no Tou (Greens Japan).

The new party plans to field candidates in the Upper House (House of Council­ors) election scheduled for mid-2013, and in the proportional representation bloc in Tokyo for the Lower House (House of Rep­resentatives) election, which must be held by August 2013.

“We seek to become a party that reflects the public’s desire to abolish nuclear power. We want to create a broad network to ac­commodate calls for the abolition of nuclear power plants,” said Ms. Nao Suguro, 33, a Green member of the Suginami Ward Assembly in Tokyo, at the press conference announcing the party’s founding.

“We need to change the nation’s industry and its reliance on atomic energy,” added Mr. Hitoshi Nakayama, 53, a Niigata municipal assemblyman and also one of the new Green Party’s co-representatives.

Drawing upon its roots in the Global Greens Charter, the core policy of Midori no Tou is to substantially increase the use of renewable energy sources, to end Japan’s dependence on nuclear power and to greatly reduce carbon dioxide emissions.

New opinion polls have not yet been taken to gauge Greens’ support. But existing polls suggest that voters disenchanted with the ruling Democratic Party of Japan (DPJ) are not automatically flocking to the established opposition Liberal Democratic Party (LDP), under whose watch more than 50 reactors were built across this earthquake-prone country.

Instead, more than sixty percent of Japa­nese voters identify themselves as non-affiliated, and recent anti-nuclear dem­on­strations in Tokyo have also included many younger people who are protesting —and potentially voting—for the first time. Several civic groups and non-governmental organizations are also looking for new electoral alternatives.

“As the ruling party and the largest op­position party have both approved the re­start of nuclear reactors, voters are deprived of the option to realize the stance ‘breakaway from nuclear power and objection to the resumption’,” said Mr. Akira Miyabe, 59, the Greens Japan deputy head.

Already Japanese Greens have been successful on the municipal and prefectural level. Today there are over 70 Greens elected in cities and prefectures nationwide, including Ms. Kazumi Inamura, who in November 2010 became the first Green and the youngest female mayor (at age 38) in the history of Japan, in the City of Amagasaki (population 460,000). Unfor­tunately, the barriers to participation in elections to Japanese parliament are much higher than for local elections.

Perhaps the major challenge to Greens Japan is the restrictive nature of the Japanese national electoral system, which features mostly single-seat, winner-take-all districts, combined with required election deposits and a minimum number of candidates just to participate. Then there are the costs of conducting a national campaign, in order to achieve a high enough percentage of the vote to actually win seats and not lose the deposits. In addition, unless and until a party has five members in parliament, its candidates have to run as unaffiliated.

On the positive side, 96 out of 242 House of Councilors seats are elected by proportional representation from a single national list, with half elected every three years. It is from these seats that the Greens Japan have their best hope of electing their members, when these seats are contested in 2013.

Yet to even contest these seats, a party is required to at least run 10 candidates and put down a deposit of 6 million Yen (US $76,260) for each, meaning it will require more than three quarters of a million dollars (US $762,600) just to get on the ballot —and unless the party receives enough votes to win seats, it will lose this deposit entirely. Raising these funds is something Japanese Greens have not done in the past, but are now prepared to do, according to co-deputy leader of International Affairs, Mr. Rikiya Adachi, 39. “This time,” he says, “Greens Japan has set an overall campaign goal of 100 million yen, of which we have already raised more than 10 million.”

The new Green Party Midori no Tou sprang from a political organization called Midori no Mirai (Green Future), which was formed in 2008, and included among its members about 70 Green lawmakers in municipal and prefecture assemblies. The organization was disbanded in 2012 to form Greens Japan, with 1,000 members of Green Future joining the new party.

This is not the first time there have been attempts to start a Green Party in Japan— efforts date back to the 1990s and even the late 1980s. But all have faced the restrictive Japanese national electoral system.

Perhaps the first successful national Greens effort was the Rainbow and Greens Japan. Founded in 1998, it began as a network of 250 active, Green-thinking citizens longing for political reform, including 120 local legislators, and the former Mayor of Hiro­shima as an honorary member. Many then attended the 2001 Global Greens meeting in Canberra, Australia. Their positive experience led them to host the Asia Pacific Green Network (APGN) founding meeting in Kyoto in February 2005, held just days before the effective start of the Kyoto Protocol Climate Change Treaty. The meeting’s lead organizer Ms. Satoko Watanabe, was a three-term Green member of the Kagawa Prefecture assembly and is a two-term APGN representative on the Global Greens Coordination.

In 2002, a second group was founded by Mr. Atsuo Nakamura—a famous actor and writer who was already elected to the House of Councilors as a member of Sakigake, the Pioneer Party. Before he faced re-election in 2004, Nakamura formed the Environ­mental Party Greens out of the Pioneer Party, and drafted nine others to run on his party list. Together they received about 900,000 votes (1.62 percent)—just short of the 2 percent needed to win seats and be certified as an official political party for the next national election. As a result, Nakamura lost his seat. Despite this, the network that grew around the campaign resulted in the founding of the first incarnation of Greens Japan.

As they did not have official party status, in 2007 Greens Japan ran internationally known Mr. Ryuhei Kawada as an independent candidate for the House of Council­ors. A 31-year-old HIV-positive human rights activist who had recently attended the Global Young Greens meeting in Kenya, Kawada was elected to the fifth seat in a five-seat, winner-take-all district in Tokyo . His spirited campaign included inspirational speeches about his experiences as a victim of an HIV-infected blood product, and his fight against the government and the company that infected him.

Spurred by this success, the Rainbow and Greens merged with the Greens Japan after the election, with the new organization Midori no Mirai, with over 600 members and 60 elected local officials at that time. Ironically, Kawada left to join a new center-right party in 2009 that split from the LDP.

On the evening of July 29th, Greens joined thousands of anti-nuclear protesters to form a human chain around the Japanese Diet (parliament), protesting the reopening of nuclear power plants following the Fukushima nuclear disaster. The “Encircle the Diet” rally was organized by a coalition of citizen groups and helped prompt the Asahi Shimbun, Japan’s leading daily newspaper (circulation eight million), to write an editorial the next day, stating: